You have probably seen more and more athletes working out or performing while wearing athletic tape in various patterns all over their bodies. Known as kinesis taping, it is different to athletic taping of the past. Kinesiology taping first began as a way to promote healing from injury, but has since evolved to become a performance enhancing technique.

Greg van den Dries first became fascinated by this taping method when he was recovering from his own leg injury. Through research he learned the many uses of the tape. The tape itself, however, was hard to get a hold of unless you were certified through a manufacturer. Greg decided to remedy this situation by founding his own company, RockTape. You are probably asking yourself the same question most people ask – how can tape help your performance? According to RockTape, there are a few reasons.

Sensorimotor (proprioceptive) system – It is a system of receptors (in this case cutaneous/skin receptors) that communicate with the brain about the body’s position. If we can tap into that system and heighten the awareness of our body in space, we can enhance performance. Essentially, the tactile nature of the tape makes your body more aware of its own location and movements. 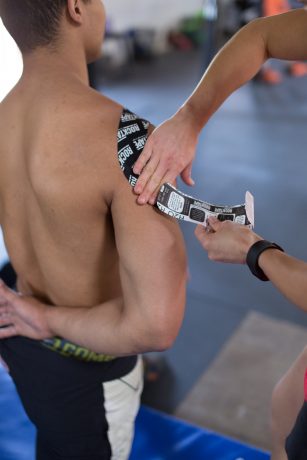 Inflammation control – RockTape lifts skin away from the underlying fascia, which holds blood and lymph vessels and nerves. This extra space relieves fluid congestion, reduces inflammation and pain, and allows for increased blood flow and therefore accelerated healing. By keeping inflammation at bay, pain receptors are not activated and this can result in enhanced performance.

Kinetic chain – PowerTaping was developed based on the concept of muscles acting as parts in a chain. It uses the “all one fascia” concept explained by Thomas W. Myers in his book Anatomy Trains. Essentially, what this means is you are taping the movement pattern, not an isolated body part. One beneficial aspect of this method of taping is the elastic recoil of RockTape assists in bringing muscles back to their original position efficiently when a movement is completing. This can result in an increase in performance.

If you want to learn more about RockTape, or try it out for yourself – get in touch now!