September means two things in Melbourne — the long-awaited coming of Spring, and the footy finals. Rian McGough shares his team experiences in honour of the upcoming event.

The fever sets in.

After a long season of wins and losses, muddy July grounds and cold Thursday night training sessions, the smell of September air has crept in. The aroma of freshly mown grass and longer sunny days are enough to get anyone excited – football fans or otherwise.

I have enjoyed playing Aussie rules football since I was seven years old, and have experienced many September successes and heartbreaks along the way.

Looking back, one of my biggest September highlights was when I was playing football in the under 18s TAC Cup competition. My team at the time, the Calder Cannons, made it to the last day in September. We played off in a curtain raiser before the AFL Grand Final on the hallowed MCG turf.

It was a huge buzz to be out there on the main stage of Melbourne’s famed sporting colosseum – partaking in the big dance with an audience slowly swelling towards 100,000. After a promising first half, we surrendered a healthy lead – falling short by a couple of kicks at the final siren.

Despite this initial loss, I thought that I would continue to find myself playing finals every year – with a real shot at winning. As it turns out, this was not the case. During my time playing with the Casey Scorpions, we were once again aiming for September glory. After finishing on top of the ladder after a fantastic season, we were in red hot form, and had a great camaraderie among the team.

However, in a blink of an eye, we lost back-to-back games and were out of the finals race – left licking our wounds at a local watering hole. 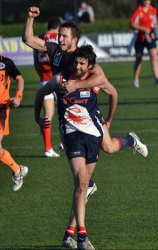 Playing for Casey Scorpions, with James Wall in the last round before the finals that year.

Setting sights on the future.

In recent years, the teams I have played for have not been in the finals contention come September.

It has left me wondering whether I will ever taste the ultimate team success. If you are a Hawthorn or Geelong supporter you might be forgiven for thinking premierships are a regular occurrence! Easy right?!

My advice would be to enjoy the September weather and the footy finals. If you are lucky enough to be playing at any level, do not take it for granted, as any old digger at the pub will tell you ‘these opportunities don’t come around that often’…now unfortunately I know they were right!