Everyone has sprained an ankle on one or more occasions. In fact, spraining your ankle is the most common injury amongst physically active people.

I have played competitive soccer for the last four seasons on various bumpy, slippery and inappropriate (cricket crease) Melbourne pitches and luckily avoided any ankle sprains. A little while ago I wasn’t so lucky, badly spraining my outside ligaments trying to rediscover my youth on a trampoline. An X-RAY showed no break (thank God)! My ankle, however, swelled up like an apple and I ended up on crutches for a few days.

Here is a description of how I acutely managed the ankle for the first 1-5 days. It can be described as RICE but with several important adjustments!

As a physio who loves playing sports, I took my recovery seriously from the start. Early management and follow-up treatment can improve healing and speed up return to sport (Kaminski et al, 2013). I rested for 3 days after my serious sprain and didn’t work. This rest is best described as relative rest, since I practiced up/down movements hourly and attempted short walks only as was comfortable. I kept the weight off the ankle for the first full 24 hours and gradually introduced it as I felt able, guided by pain and available movement.

I avoided icing. I know this is controversial, but there is a growing body of evidence to suggest that ice isn’t great for inflammation (first stage of healing – this needs to happen) and swelling. Instead, I used a big bucket of really cold water and immersed the foot and ankle for 10-12 minutes really regularly for the first three days (72 hours). It always felt much better after this and heaps less painful.

Compression is arguably the most important part of RICE recommendation, and is essential for swelling resolution and joint support. I applied compression as soon as I could, requesting a TubiGrip support in the ED while waiting for my X-RAY. I kept compression on during the day and night for the first 5 days (you’ll need a few fresh spares)! 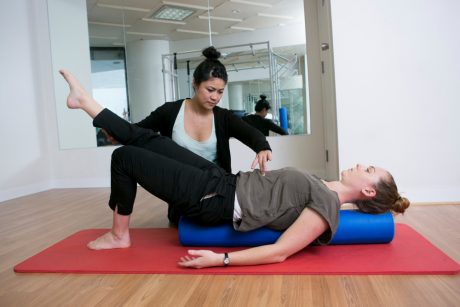 I kept my ankle above heart level as much as I could for the first two days, by lying on the couch and reading or watching Netflix. Once I started walking more, swelling can actually increase due to gravity and fluid changes in the joint. This is fine as long as you keep the walking to short periods in the first three days, with regular breaks.

I also avoided Anti-inflammatory medication. This is also somewhat controversial but is now well recognised in high level and elite sporting organisations. Inflammation is basically essential to occur to ensure a smooth and complete healing process. I did take some Panadol to help me sleep for the first two days. So – no NSAIDS for the first 3-5 days after my soft tissue injury folks! (Ligament sprain, muscle tear, muscle corky).

In summary, I avoided anti-inflammatory and ice, and instead focused on compression, early active movement and trying to walk as normally as possible. And, after all of this – I returned to work two days earlier than my sick note from the ED!

For any further information, or help treating a similar injury – get in touch now.