The gymnastics events at Rio have seen some highlights and some horrors, with glittering personal triumphs and a couple of significant individual injuries. Annie McCrystal looks into the action thus far.

I’m a little biased when it comes to sports at the Olympics. Gymnastics was my preferred sport growing up. I spent most of my childhood tumbling around a gymnasium and trying not to fall off beams.

Like most other eight year olds watching the ’96 Atlanta Games, I dreamt of one day competing at the Olympics. Unfortunately, that didn’t pan out. But I still love to follow what’s happening in the sport and marvel at the unbelievable advances the athletes make each year. These gymnasts keep squeezing in an extra sault on vault or an extra twist into the layout in their floor routines.

It’s extraordinary to see how far they can push things. Up to this point, Rio has been no different offering extraordinary athleticism and entertainment in equal measure.

Pushing things to the limit so frequently is not without risk. The medical team at the Artistic Gymnastics in Rio have been kept busy, with at least two major injuries interrupting competition and devastating the men’s teams.

First there was French gymnast, Samir Ait Said’s horrifying tibia-fibula fracture when he under-rotated his Tsukahara double pike on vault. Even with what would have been an excruciating injury, he still managed to wave to the crowd as he was stretchered out of the stadium. Apparently, Ait Said wasn’t even annoyed when staff dropped his stretcher while transporting it into the ambulance. Legend.

Then there was Germany’s Andreas Toba, who ruptured his anterior cruciate ligament (ACL) as he landed his front twisting layout on Floor.  The heroic part? Toba still went on to compete his pommel routine with the raw ACL tear to get his teammates through to finals – and managed to top-score for the Germans on that apparatus. For me, that’s the kind of performance that encapsulates the spirit of the games. 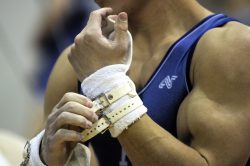 In my opinion, Olympic gymnasts are the epitome of physical ability, with the perfect mix of strength, flexibility, agility, body and aerial awareness, and bravery. The injuries we’ve seen at the gymnastic in Rio have been acute, traumatic landing injuries that are hard to prevent.

I think that when most people think of gymnastics, they think of flexibility. Most gymnasts are seen as flexible because they can do the splits. However, natural flexibility alone is not enough to make an elite gymnast. The more flexibility or ‘hypermobility’ you have, the more strength you need to stabilise the movement in the joints.

In fact, too much mobility can actually be a disadvantage in gymnastics, because you are more prone to overuse injury. Artistic gymnasts will actually spend twice as much time in training working on strength and conditioning, as they do on flexibility.

Gymnastics training and the general population.

The concept of balancing strength with flexibility is actually quite relevant to the general population. Joint Hypermobility Syndrome (JHS) is a condition that affects 20-30% of individuals and is most common in childhood/adolescence, in females and in those of Asian and Afro-Caribbean heritage.

It refers to the extra mobility available in joints where they should be well controlled by the ligaments and other passive tissues surrounding the joints – in hypermobile people, these tissues are lax.

While most of the population aren’t required to do the splits on a regular basis, a lot of people do enjoy practicing yoga or other forms of exercise/meditation that involve stretching and movements into extreme ranges of joint motion. I find that a lot of naturally mobile people end up participating in activities like yoga because they are able to achieve poses that naturally stiff/hypomobile people cannot. However, these people can often require physiotherapy to treat the injuries they sustain from overstretching unstable joints.

To address this, we look at balancing out any asymmetries that may be causing overload on isolated joints. This approach compensates for weakness elsewhere in the body. We then target the local joint control by retraining the small muscles close to the joint that need to make up for the extra movement. The final phase is to strengthen the more superficial layers to help reinforce the overall joint stability. 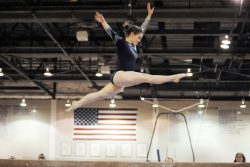 While being flexible can be advantageous, it can also take a lot of work to manage. As with the gymnastics at the Rio Games, there can be highlights and low points. If a hypermobile person doesn’t back up flexibility with sufficient strength work, it can lead to further instability and even injuries and long term pain. Maintaining the perfect balance of strength and flexibility is all about preparation, hard work and discipline. Again, just like the gymnastics at the Rio Games.

With the finals of the men’s rings, men’s vault and women’s pommel horse coming up, we’re sure to see plenty of balance, strength and flexibility on display. As always, I’ll be watching with a keen eye – will you?