Yoga has many health benefits including the improvement of strength and flexibility. Yoga can often be beneficial in conjunction with a tailored rehabilitation program, so if you’re a keen Yogi this is good news as you don’t have to give up one for the other! But there are injuries that can occur if Yoga is not performed correctly, and in todays article Rehab Physiotherapist Lisa Friend lists these injuries and how to prevent them!

The term ‘yoga’ translates to ‘union’ and its origins date back to ancient India at around 500 BC. There are many different types of yoga, with one of the most common forms practiced in the modern western world being vinyasa yoga.

The word ‘vinyasa’ denotes a flowing, dynamic form of yoga where movement through a sequence of postures (asana) and breath (pranayama) are linked to produce a strong, controlled practice incorporating static and dynamic strength work, cardiovascular training and sustained stretching to improve flexibility. 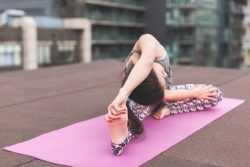 Yoga can be used to safely and effectively improve strength and flexibility as a part of your overall health and wellbeing. Unfortunately, like in many forms of exercise, improper practice can result in injury. This is generally due to inexperience of the student/instructor, competitiveness of the student or lack of instruction/feedback on technique from the instructor.

Common injuries in yoga include:

Hamstring tendinopathy often occurs due to repetitive loaded hip flexion/extension (i.e. moving between forward bending and standing upright). It can often be avoided by proper technique cues such as bending the knees and conscious activation of quads, hamstrings and gluteals through the movement. If tendinopathy occurs, rest from forward folds is essential until the tendon has been rehabilitated.

Gluteal tendinopathy often occurs due to compression of the tendon over the greater trochanter during yoga postures that involve twisting such that the shoulder moves towards the opposite knee or ankle. Avoid or modify these twisting postures to remove the twisting component until the gluteal tendon has been rested and then properly strengthened.

Low back pain during yoga can occur for many different reasons and is often associated with either forward or backward bending. Proper technique involving correct core activation and strength is the key to avoiding low back pain and injuries, however if pain cannot be avoided with the addition of correct core activation then modifying or avoiding postures that produce pain is important.

Knee pain during yoga may occur due to hyperextension while under load, excessive tibial rotation (often due to limited hip range of motion) and poor alignment in standing poses such as lunging, causing strain on collateral ligaments. Proper technique and knee alignment over the 2nd toe can prevent almost all knee injuries caused whilst practicing yoga and avoiding or modifying certain poses if an injury is present is the best way to prevent further pain and dysfunction.

Shoulder pain can have many causes however two common injuries in those who practice yoga are impingement during postures such as downward facing dog and long head of biceps tendinopathy during the movement from high plank to low plank, called chaturanga. Most people will not initially have sufficient shoulder strength to repeatedly perform these two poses with proper technique, so modifying by dropping to your knees or resting when necessary is the best way to avoid injury.

Wrist pain commonly occurs during any yoga posture that requires bearing weight through the hands. It can often be prevented with proper muscular activation (slight grip of the finger tips and full contact of palm to mat) and alignment of the wrists such that the wrist creases are parallel with the front of your mat. 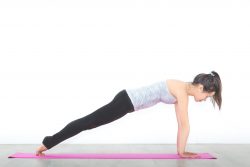 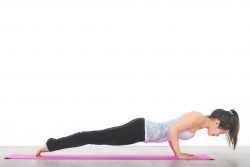 If you are experiencing pain or have developed an injury due to yoga practice then book an assessment with one of our experienced physiotherapists. Our team will create a tailored treatment program just for your specific needs, and educate you on how to prevent that pain in the future!