As I stood there on the beach that morning with my 3 friends in the pouring rain, watching lightening strike the ocean about 500m away from where we were standing, I couldn’t help but think about the final scene in “Blackadder goes Fourth” where Blackadder and his troops are about to go over the top to their inevitable death…

One of our many fears when swimming was that our goggles would get kicked off in the ruckus that takes place in the water. So, the week before the triathlon we bought these rather expensive goggles that had such a wide frame they were seemingly impossible to get kicked off. The surface area created so much suction when applied to the face that in the event of receiving a heel to the cheekbone, the extra suction created by the impact may very well pull my eyeballs clean out of their sockets. I’d also remembered that at every event we’d done in the build up to the triathlon that the sun would be absolutely BLINDING when it came up during the swim, so I made sure that I bought the goggles with tinted lenses. This was a decision I was now regretting as I looked out into the dark abyss and could barely see 10m in front of me. The atrocious conditions had turned my fancy new goggles into a blind fold! For some reason, I thought the first time I’d be dressed head to toe in neoprene and blindfolded I’d be a little more excited. 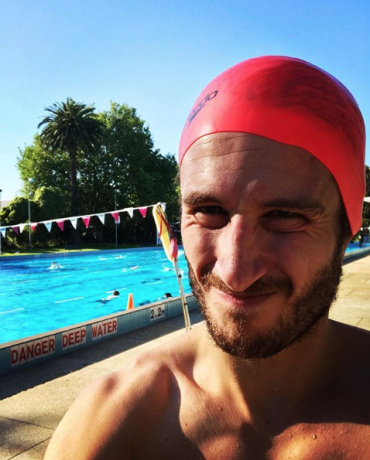 The swim was much worse than I’d anticipated. The clown that put the course together had put the first corner a mere 100m from the shore, meaning I was quickly involved in a floating human centipede with so little room to move that all you could do was tread water and be dragged along like a bowl of people soup getting poured down the plug hole. I’d been warned about people trying to ‘swim over the top of you’ and until that day I just thought it was something that experienced open water swimmers said to put the spooks on you. But no, people DO in fact try to swim OVER THE TOP OF YOU. A more common term for this tactic used for land based mammals is ATTEMPTED MURDER. To my disbelief, I had managed to remain calm when this attempt was made on my life and responded by driving my elbow as hard as I could into the man’s midriff – all those days watching The Rock layeth the smacketh down on WWE Late Night Raw had finally come into fruition and I now realised I had finally become ONE OF THEM! I’d made it about 1.6km into the 1.9km swim before the next attack, which came in the form of a heel to the front of my pelvis, mere centimetres from what would have almost certainly been game over. I thanked my lucky stars that I still had the option of children in the future and that my legs were pretty much useless in the water anyway and powered on to the shore. 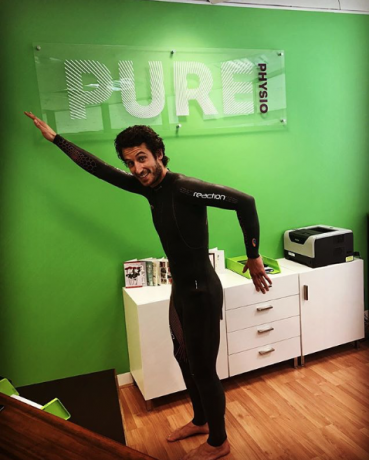 The overwhelming joy felt when my feet finally touched firm ground again is something I will struggle to put into words. I’d bought some waterproof shoe covers to help prevent my feet turning to solid blocks of ice on the bike but my hands were too cold to function properly to get them on, so rather than waste an hour in transition, I bit the bullet and went out on the bike essentially barefoot. I was about 10km into the cycle when the 50kph crosswinds set in. I know I have a certain predisposition for the dramatic, but I have literally never felt anything like it in my 10 years of cycling. At one point, with the ground being so wet, I was actually pushed across the road sideways! If someone had been overtaking me it would have been curtains. It was sheer chaos! I must have seen 4 or 5 incidents of people getting catapulted over their handlebars due to the wind hitting their front wheel like an invisible sledgehammer. As I contemplated the very real possibility someone had spent the evening of the 8th planting claymore mines along Beach Road I approached the first turning point with extreme caution. It was at this turning point that I saw one of my mates for the first time since the start line. He was standing next to his bike! Adopting the ‘every man for himself’ policy that had been embedded in my mind since the armpit based drowning attempt earlier in the race I didn’t stop to help, the bike looked functional and I couldn’t see any broken limbs… maybe he’d prematurely taken an Energy+ gel and was experiencing intestinal turmoil. Turns out he’d overcooked the first corner not realising the road markers in the middle of the turn had become a slip’n’slide in the rainy conditions and slid off. 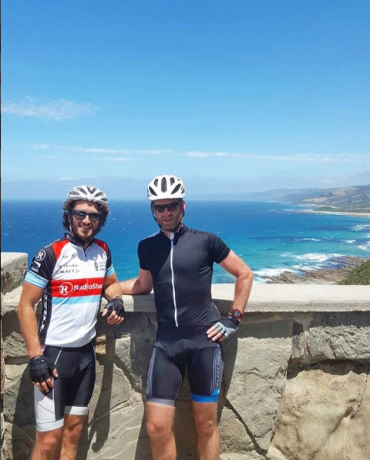 Having spoken with ironman athletes in the build up, the topic of “what do you do when you need the bathroom” came up frequently. I was advised that if it was purely a number one then to embrace the eternally wise words of Lloyd Christmas and “Just go man”. A task, I was told, that was quite a difficult thing to do whilst cycling. Well maybe it is when you’re not soaked to your core, freezing cold and petrified you’re going to be the next victim to human cannonball over the handlebars! I managed it 3 times during the 90km ride – a statistic I’m proud of to this day. The delight felt from the brief moment of warmth the act provided was soon forgotten with the realisation of what was now pooling in my cycling shoes. The true devastation being that by the time the liquid got to my feet it was providing no warming effect whatsoever…or maybe it was, by kilometre 30 my feet were so numb my cycling shoes could have been on fire and I wouldn’t have noticed. Oh the irony of comparing this event, on so many occasions, to a battlefield and now I was presented with the very real possibility of finishing the day with trench foot.

I experienced a similar level of relief to the cycle being over as I did the swim: 2 down, 1 to go! Although the conditions so far in my mind had been the worst possible conditions a person could ask for, I actually quite liked running in the rain! My ONLY concern regarding the run was going blind and collapsing, and that had only ever happened in the heat – WIN! I hadn’t, however, considered starting the run with totally numb feet. Yes, it meant my mind was now at ease about the phantom right foot pain I had developed 2 weeks prior, but running on numb feet isn’t exactly ideal. I must have looked like a drunk giraffe for the first few kilometres of the run. My mind was eased further during the run, when I saw the frequency of toilets enroute. I had begun to believe the term “brick” session had come about by the unfortunate impact cycling and then running had on your lower intestine and I hadn’t managed a single training session without having to “frequent the facilities” at some point during the run, so had mentally prepared myself for having to perform a splash’n’dash somewhere along the 21kms…but would you believe that time never came! And thank God, because had what happened to me when I finished the event, happened on the porcelain throne, I’d have almost certainly had to be crowbarred off the toilet by the emergency services.

As I approached the line I was pleasantly surprised by how little my body hurt, but the second that I stopped, a tsunami of agony came crashing through my entire body as rigor mortis set in. I have to admit, I felt quite emotional crossing the finishing line and if there were an millilitre of liquid left in my body I’m certain I would have shed a tear. Instead, what happened was some kind of strange convulsing as I was consumed by both emotion and pure agony at the same time. At the end of Challenge Melbourne they give you a beer which I think was the sweetest, most satisfying beer of my life…I mean totally inappropriate and borderline negligent to be offering beer after putting your body through such extreme stress, but pleasant nonetheless.

A Triathlon? I’ll give it a go!

I completed the event in 5:10:38, which was 30 minutes faster than I had aimed for, so needless to say I was a very happy, if not totally broken man once I had crossed the finish line.  So… what is the “take home” message? I’m not quite sure…

Nonsense aside, a few things that I would strongly recommend…

If you are considering completing in any event similar to the Challenge Melb – make sure you get checked by the triathlon legend himself! Book in now!