Turns out noughties pop sensation Shakira was very wise! Not only should you NEVER confuse breasts with mountains, but the hips truly do not lie… when it comes to running injuries that is. 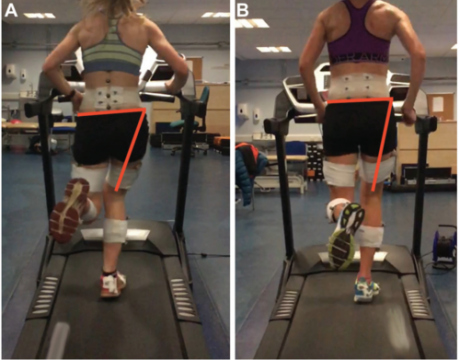 Why do my Hips betray me?!

In my clinical experience the pelvis dropping and knee rolling in tend to go hand in hand, like the phrase G.O.A.T and Eliud Kipchoge, and are a consequence of weakness within the Gluteal complex.  So without including specific strengthening of these muscles it can be a tricky one to change with run retraining alone. Particularly when trying to correct the pelvic dropping motion, an expert level of body awareness is required, which doesn’t tend to be a prerequisite for becoming a runner… unless of course you spent your adolescent years belly dancing your way through school, in which case it will be a breeze.

Our Glutes are Onions!

It’s important to understand that, as another wise but slightly hairier guru of the noughties would say, your Glutes are like an onion, there are many different layers and these layers have different roles, particularly when running. (yes that was a Shrek reference!)

Gluteus Medius, for example,  has the greatest influence on keeping your pelvis level when you land. It is also a strong Abductor of the hip (moving your leg out to the side away from your body) which is another very important function when running. But just because you train it as a Hip Abductor, for example with the ever-popular Crab Walk exercise, you may well be able to issue someone with a “sweet chin music” that Shawn Michaels would be proud of, but it may not necessarily improve the muscles ability to stop the pelvis from dropping.

Another incredibly important group of muscles within the Glute complex are the “Deep Hip Rotators”. This is a collection of 6 muscles that all contribute to Externally Rotating your hip (rolling/rotating your knees apart) and therefore help prevent them from rolling in.

The problem I see in clinic with these muscles is that they can be pretty hard to isolate, particularly in the injured population, and it’s quite easy to use other muscles instead of the ones you’re trying to target. An example of this would be with the even-more-popular “Clamshell” exercise, where it’s easy to perform the movement with your Hip Flexors… particularly, if instead of a health progressional, the exercise has been prescribed by Dr. Instagram YouTube-Google.

Now, you may conclude from reading this blog post that I have a seafood allergy when it comes to Glute strengthening exercises, this is not the case! I think both of those exercises are fantastic exercises if performed correctly and are relevant to what you’re trying to change.

So how do I get Glute-ilicious?